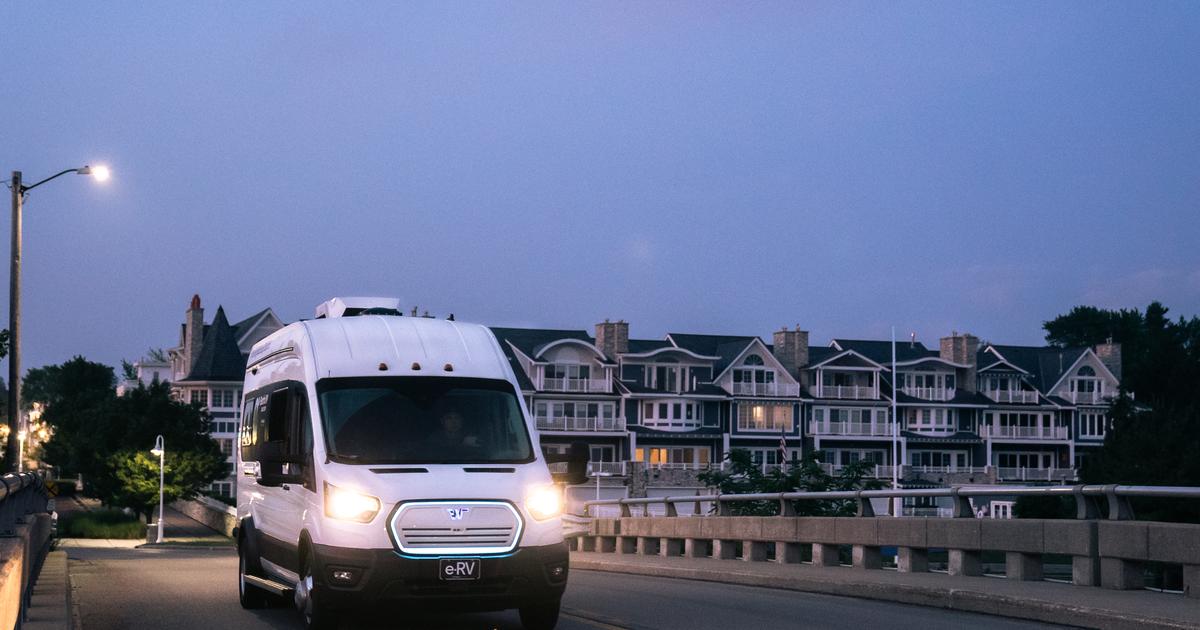 Electric camper vans are really starting to take on a life of their own in Europe, where recent debuts have included the Volkswagen Flowcamper Volt and Peugeot e-Rifter Vanderer. In North America, though, electric campers remain parked in the concept stage, pressing forward slowly but steadily. Winnebago just got home from an extended 1,400-mile test spin in its e-RV. The company is quick to point to the trip as evidence of the feasibility of electric campers, but its experience just as readily affirms the large uphill battle that all-electric RVs face in the American market.

Against a backdrop of record-high US gas prices, Winnebago announced last Thursday the completion of a 1,380-mile (2,221-km) trip that started in Washington DC after “RVs Move America Week” earlier this month and ended at Winnebago HQ in Eden Prairie, Minnesota. The journey meandered through West Virginia, Pittsburgh, Ohio, Detroit, Chicago and a few other stops before landing Winnebago back at home base.

Winnebago says it was the longest continuous trip it has so far taken with the e-RV and defines it as the first known trip over 1,000 miles (1,600 km) in an electric RV. We suppose that might depend on how one defines “all-electric RV,” but Winnebago’s wasn’t the first well-publicized electric camper trip to hit that mark. In 2020, Frank Eusterholz took a 4,660-mile (7,500-km) trip in a Volkswagen e-Crafter outfitted with a PlugVan camper-in-a-van. Eusterholz stopped to charge nearly 100 times on his there-and-back escape to Europe’s northernmost point.

Perhaps Winnebago can claim the first 1,000-plus-mile trip in the US, as the e-RV concept is one of the first electric RVs revealed on the other side of the Atlantic. Members of Winnebago’s Advanced Technology Group, which developed the e-RV, took turns driving legs of the trip with the goal of documenting real-world performance and taking data for use in refining the design. They also chatted with RV and EV owners along the way to gather feedback.

Using the e-RV’s estimated 125-mile (201-km) range, the trip had to have at least 11 charging stops involved along the way. At an average of just over an hour of charging per stop, that’s over 11 hours worth of charging time to 26 hours of reported behind-the-wheel driving time. Some of those stops certainly coincided with overnight stays or meal breaks, but rolling at an average speed of 53 mph (85 km/h), the team definitely didn’t need to stop every 2 hours and 21 minutes to sleep or eat.

Winnebago’s numbers more precisely illustrate what we already knew: 125 miles is simply too little range for the type of long road trip for which RVs are designed. Those figures also suggest that, at least in the near term, Winnebago competitor Thor Industries might be on the right track with its Vision Vehicle, a Class B+ electrified motorhome with a 300-mile (483-km) range derived from both a high- capacity battery and a fuel cell. Swap that fuel cell for a small range-extending gas engine that’ll be easier to refuel in the here and now, and RVers could immediately enjoy the combination of solid driving range, quick, easy refueling and sizable stretches of zero-emissions driving.

Winnebago would probably counter citing internal research that suggests more than half of new buyers prefer trips under 200 miles (322 km). But Thor Industries focuses on a different part of the story, noting that in its recently published North American Motorized Electric RV Study, it found that 45 percent of consumers expect to drive for five to six hours on a single charge. The study further revealed that only 3 percent of consumers expect to charge after two hours or less.

Unless it’s traveling at residential speeds, the Winnebago e-RV would fall well short of five or six hours. In fact, at typical highway speeds of 60 to 65 mph (97 to 105 km/h), it would instead drop into that two-hour window. Thor’s Vision Vehicle range-extender would come close to five hours of driving at those same highway speeds, falling short at higher speeds.

We tend to see things more like those consumers cited in Thor’s study. If we’re going to buy a full-size van camper or a larger motorhome, we wouldn’t expect to be held back by a limited range. While we might sometimes use such a vehicle for short ~100-mile trips, we’d be spending that kind of money specifically for something that could handle longer trips. Mandatory stops every two to three hours just isn’t feasible for long-mileage trips with a targeted destination and timeframe, and we’re not even sure they work for a more leisurely “journey is the destination” style of trip.

In the “pros” column, Winnebago’s trip rang up a total bill of $275 for recharging fees. That doesn’t necessarily sound cheap immediately, but AAA average US gas prices hovering around $5 per gallon, it gets cheaper. Winnebago estimates savings at more than $400, but that’s based on a comparison with a gas vehicle getting 10 mpg, which seems awfully low for anything but a larger motorhome — not a fair comparison with a Ford Transit e-camper van.

The 2022 Transit with 3.5-liter V6 gets an EPA-estimated 17 mpg combined, which would translate into $406 of gas, a savings of $131 for the e-RV. The weight of the camper equipment might knock that gas down a couple mpgs and up that savings to around $200 or so but no way should it drop it to 10 mpg.

Winnebago does not currently have any Transit-based Class B camper vans in its lineup with which to compare, but it previously published a test report on the pre-production Ekko that identified a fuel economy average of 12 mpg. That model is a larger Class B+ motorhome based on the less efficient 16-mpg Ford Transit AWD, so 10 mpg definitely seems too low for comparing a 2WD gas Transit camper van with an electric one. We’ll estimate its actual savings at closer to $200.

“We are excited to apply learnings from the road trip as we continue refining, exploring, and innovating future iterations of the vehicle,” summed up Ashis Bhattacharya, Winnebago’s senior VP of business development, advanced technology and enterprise marketing.

First among those learnings should be that 125 miles isn’t going to cut it without some type of range-extending solution.