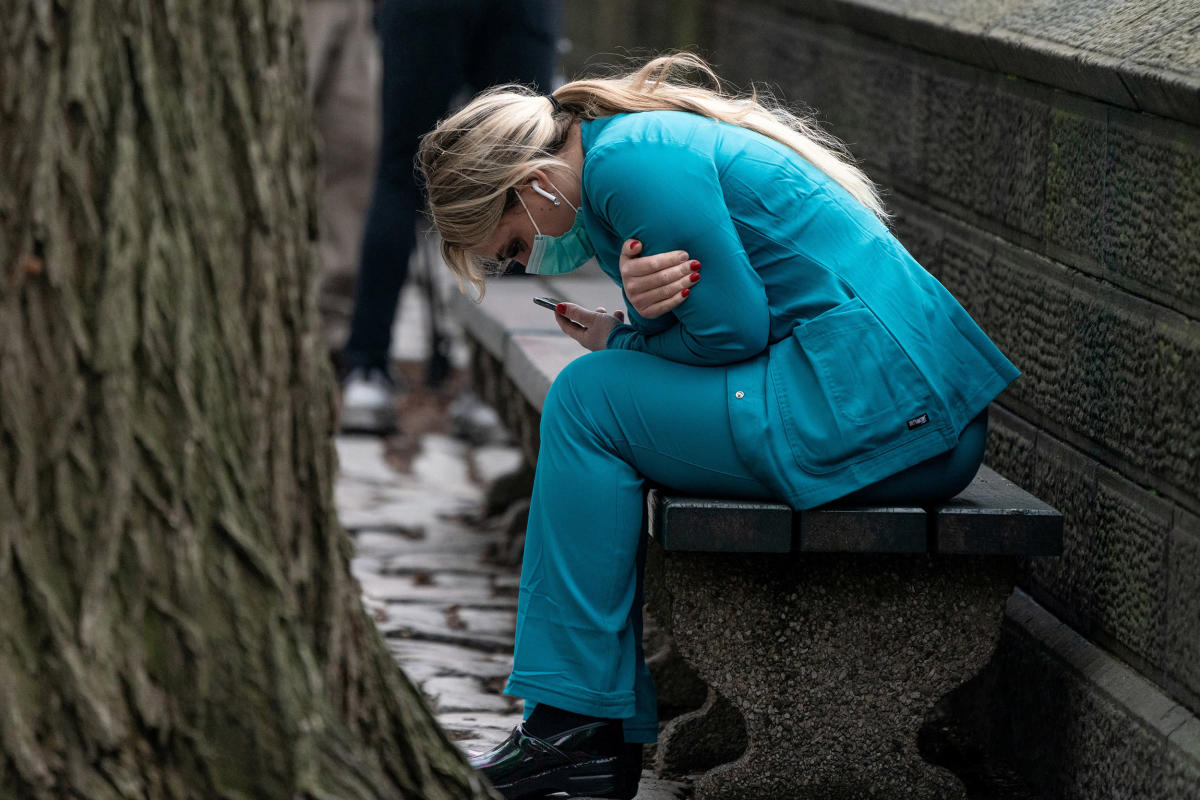 As Covid cases emerged across the US in spring 2020, comparisons were routinely made between war zones and hospitals in a state of chaos.

Health care workers of any specialty — from urologists to plastic surgeons — were recruited to help with the tsunami of extremely ill patients. Intensive care specialists were unable to save lives. Many thousands of patients died alone without loved ones because hospitals barred visitors. And workers were constantly terrified that they, too, would get sick or infect their families.

Full coverage of the Covid-19 pandemic

The war zone comparisons may not have been far off the mark: In a study published Tuesday in the Journal of General Internal Medicine, researchers reported that the levels of mental health felt by doctors, nurses, first responders and other health care personnel early in distress the pandemic were comparable to what’s seen in soldiers who served in combat zones.

What health care workers faced early in the pandemic is a type of post-traumatic stress called “moral injury,” said Jason Nieuwsma, a clinical psychologist at Duke University School of Medicine in Durham, North Carolina, and author of the new report.

Moral injury can manifest in different ways, including feelings of guilt or shame after having participated in an extraordinarily high-stress situation that required immediate and often life-or-death decision-making. It can also manifest the feelings of betrayal.

For combat veterans, such scenarios are easy to envision.

“You can imagine, for example, a combat situation where perhaps a service member was fired on a vehicle that didn’t stop at a checkpoint only to find out there were civilians in there,” Nieuwsma said.

For health care workers, moral injury stemmed from being unable to provide adequate care to dying patients and to seeing others around them flagrantly refuse to take steps to slow the spread of the virus.

In the study, Nieuwsma, along with colleagues at the Department of Veterans Affairs and Vanderbilt University Medical Center in Nashville, Tennessee, surveyed 2,099 medical personnel, comparing their responses to those of 618 combat veterans who served after 9/11.

The study found one particular form of moral injury — betrayal — was reported among 51 percent of surveyed health care workers, compared with 46 percent of veterans.

In hospitals, these emotions of betrayal resulted from seeing communities willfully ignoring mitigation measures, as well as the loss of trust, particularly in authority figures, who were supposed to keep workers safe.

“The worst is people openly expressing mistrust of the medical and scientific community after everything we’ve done for them,” one health care worker wrote.

It is “very hard to work in healthcare during this time putting myself and my family at risk while watching so many I know blatantly disregarding recommendations of safe behavior,” another wrote.

Another survey respondent expressed frustration in “community and government responses and participation in CDC guidelines. Cities and states ending mask mandates too early is incredibly disappointing.”

“Morbidity and mortality is increasing for patients WITHOUT covid because of the chaos and lack of accountability throughout the hospital system,” one person wrote. “The excuse is always, ‘things are crazy right now because of Covid.’ Before December, I’d never had a patient die due to physician negligence — I’ve now had two.”

This sense of betrayal within the moral injury umbrella has long been reported among military members, said Brian Klassen, clinical director for the Road Home Program: The National Center of Excellence for Veterans and Their Families at Rush University Medical Center in Chicago.

It’s easy to see similarities in what medical personnel have gone through during the pandemic, he said.

“Health care workers were sent into situations where they didn’t have adequate PPE, or they were told to make life and death decisions for people without adequate resources,” he said.

For the health care workers, these emotions stemmed from what they saw as subpar care in their facilities.

One described having to ration care for patients “who we thought had the best shot.” Another wrote about feeling stretched so thin that it impacted patients: “I am certain my patients and their families didn’t get the best care because I was so overworked.”

“My line in the sand was treating patients in wheelchairs outside in the ambulance bay in the cold fall night,” one worker wrote. “I got blankets and food for people outside with IV fluid running. I was ashamed of the care we were providing.”

“Not allowing visitors for dying patients is so morally reprehensible that I cannot even express it,” another wrote.

Such demoralizing situations have many health care workers to feel led out and to question their purpose, Nieuwsma said.

“A lot of these people entered this profession because they want to provide care for people, they want to help other people,” he said. “I think for many folks that that’s what has been challenged or ruptured.”

While awareness and treatments specific to moral injury are lacking, Klassen said some therapies can provide help.

“What we need to do is work on deploying effective treatments to the populations that need it,” he said. “It’s a formidable challenge, but it’s not insurmountable.”