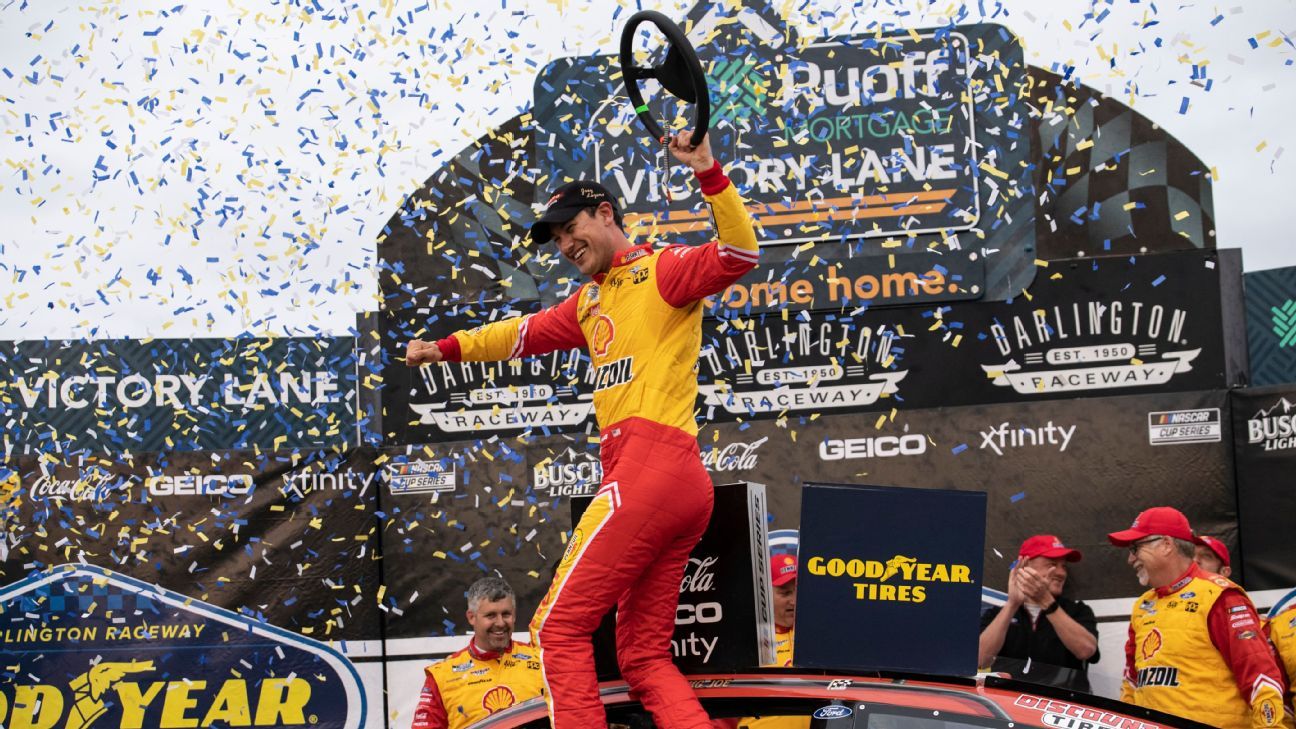 DARLINGTON, SC — After William Byron squeezed him against the wall on a final restart, Joey Logano knew what he’d do if he got the chance to regain the lead.

Logano bumped Byron from behind on the next-to-last lap to win the Goodyear 400 at Darlington Raceway on Sunday. Byron hit the wall in turn three and Logano went on to his first win of the season and first at the track “Too Tough To Tame.”

“There’s something to be said for an angry race car driver,” said Logano, who broke a 40-race winless drought.

Logano, who started from the pole, had one of the strongest cars all day and was in front coming out of the pits before a restart with 25 laps left. But Byron, who started low, forced Logano into the wall and out of the lead.

“If someone’s going to be willing to do that to you, then the gloves are off,” Logano said.

Byron was not happy with the maneuver, calling Logano an “idiot” and a “moron” who has raced others questionably throughout his career.

The fans at Darlington let the Team Penske driver know what they thought, booing the 2018 NASCAR champion when he got out of his car.

“I’ve been called a lot of things, a lot worse than moron,” Logano said.

Byron, who signed a contract extension with Hendrick Motorsports, seemed as if he’d keep up his team’s dominant season over the final laps. Instead, Logano broke a 40-race winless drought.

Byron fell to 13th. He said the restart was just close racing and Byron didn’t deserve a hard hit on the rear bumper so close to the end.

“He slammed me so hard, it knocked all the right side off the car and sent me into the corner,” Byron said. “He’s just a moron. He can’t win a race, so he does it that way.”

Logano led 108 of the 293 laps and reached Victory Lane for the first time since winning on the dirt at Bristol in 2021.

It was the first time the new Next Gen car was taken on NASCAR’s oldest superspeedway and the results were mixed. The racing was strong, although several of the top competitors didn’t last to the end.

Reigning NASCAR champion Kyle Larson was out with engine failure after 112 laps. Past champions Kyle Busch and Brad Keselowski were also out well before the finish.

FAVORITE ODDS-ON?: Larson was the betting favorite to win for the first time at Darlington. But the defending Cup series champion continued his tough luck at NASCAR’s oldest superspeedway. Larson, starting second, led 30 of the first 32 laps before spinning out on lap 54 and falling to 29th.

Larson had worked his way into the top 10 early in stage two before returning to the pits where his crew popped the hood. They couldn’t get the car refred — “I’ve got, like, no power,” Larson told them — and rolled him into the garage.

It’s been that kind of stretch for Larson, who was second in his past three races at Darlington. At a tire test here last month, Larson hit the wall twice early on.

It’s the fourth time in 12 races this season Larson was out before the end.

“Bummer,” Larson said. “But the positive is we were really fast.”

PARKING SPOT: Kyle Busch’s day ended after he couldn’t avoid running into Brad Keselowski after the Roush Fenway racer tagged the wall right in front of Busch. A frustrated Busch rode his No. 18 car to pit road and left it there, walking off into his trailer.

A tow truck had to hook up the Joe Gibbs Racing machine and move it to the garage. Busch had led 19 laps early in the race.

Last year, Busch was fined $50,000 by NASCAR when at the Southern 500 here he drove his damaged machine into the garage, knocking over several cones and causing people in the path to scatter quickly.

Busch was asked why he stopped where he did. “Just couldn’t make the corner,” he countered.

UP NEXT: The series moves to Kansas Speedway, where Kyle Busch is the event’s defending champion. Kyle Larson won the October race in Kansas.