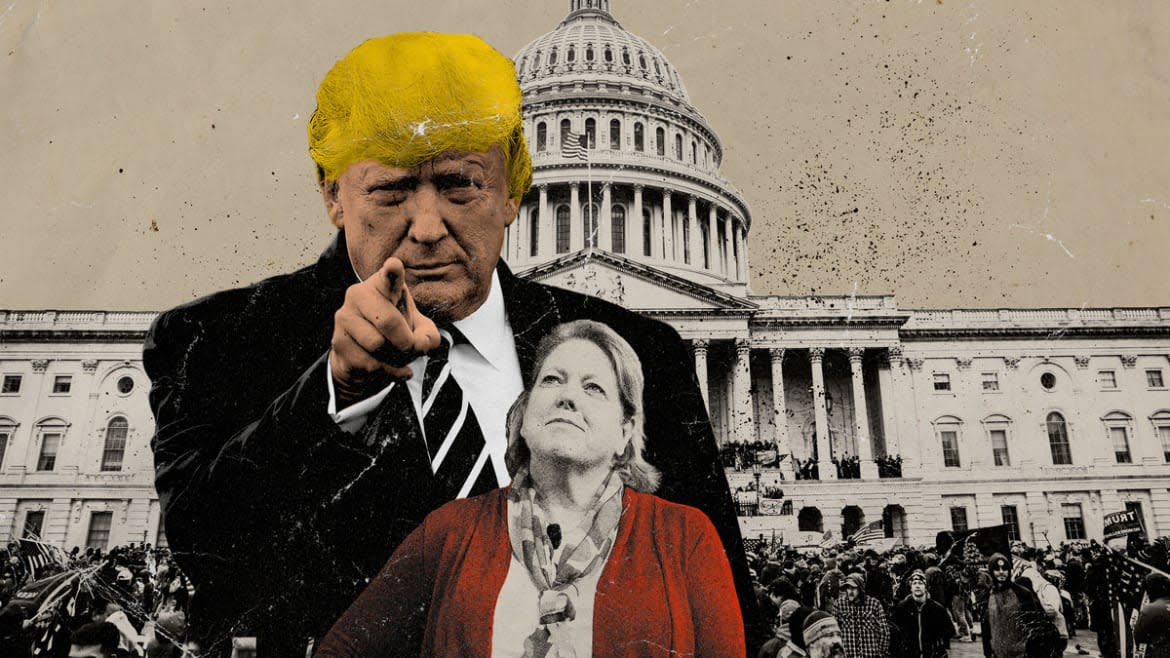 Years before she became one of then-President Donald Trump’s most prominent coup supporters, Ginni Thomas was already notorious in his West Wing for, among other things, ruining staffers’ afternoons by working Trump into fits of vengeful rage.

“We all knew that within minutes after Ginni left her meeting with the president, he would start yelling about firing people for being disloyal,” said a former senior Trump administration official. “When Ginni Thomas showed up, you knew your day was wrecked.”

Ever since she became a welcome guest at Trump’s residences, Thomas—an influential and longtime conservative activist, and wife of Supreme Court Justice Clarence Thomas—had perfected a proven formula for enthralling and manipulating the president’s emotions and mood. On multiple occasions throughout the Trump era, Thomas would show up in the White House, sometimes for a private meeting or a luncheon with the president. She often came armed with written memos of who she and her allies dela believed Trump should hire for plum jobs—and who she thought Trump should promptly purge—that she distributed to Trump and other high-ranking government officials.

The fire lists were particularly problematic, as they were frequently based on pure conjecture, rumour, or score-settling, where even steadfastly MAGA aides were targeted for being part of the “Deep State” or some other supposedly anti-Trump coalition, according to people who saw them during the Trump administration. The hire lists were so often filled with infamous bigots and conspiracy theorists, woefully under-qualified names, and obvious close friends of Thomas that several senior Trump aides would laugh at them—that is, until Trump would force his staff to put certain names through the official vetting process, three sources familiar with the matter said.

During the Trump years, these memos would astonish various administration officials, including those working in the White House Presidential Personnel Office (PPO). Some of these officials noted that as the Trump term went on, the Thomas lists would increasingly feature a disproportionate share of names more suited to an OAN guest line-up than any functional government. (To be fair, well before Ginni Thomas became a recurring visitor, Trump would routinely hire people because they had entertained or excited him, via Fox and other cable-news appearances.)

Officials in the PPO regularly annotated the margins of Thomas’ hire lists, usually including a single line for each rejected name, explaining why the prospective hires did not work out. Some failed background checks, or suffered from security-clearance hold-ups. Other annotations noted that a specific individual was offered a job in the Trump administration, but turned it down for whatever reason.

Sometimes, the reason for the White House’s preemptive rejection, despite Thomas and Trump’s best efforts, were more outlandish. According to a person who reviewed one of the Thomas lists, one annotation for a MAGA job candidate noted that that individual had made too many extreme or offensive jokes on social media that were still visible.

Another of these annotations claimed that one recommendation for a Trump administration position was, in fact, a suspected foreign-intelligence asset, or spy.

Thomas did not respond to requests for comment on this story.

Over the years, some of the specific names that Thomas had compiled and pushed to Trump and his West Wing have trickled out into the press. Among them were Fox News personality Dan Bongino, and the Trump-adulating Sheriff David Clarke.

And according to two sources with knowledge of the matter, Thomas had, unsuccessfully, advised the then-president to hire Frank Gaffney.

Gaffney, a former Pentagon official in the Reagan administration, has spent the past two decades embracing some of the more absurd conspiracy theories circulating in the far right. He has accused the conservative anti-tax crusader Grover Norquist of being a secret agent for the Muslim Brotherhood and believes that American adversaries are working on secret electrical device-frying “electromagnetic pulse” weapons to zap America back to the pre-industrial age.

“These fucking lists were so insane and unworkable,” said one former Trump White House official who had to personally deal with the Thomas-supplied memos and Trump’s fascination with them. “A lot of them were dripping with paranoia and read like they were written by a disturbed person.”

After Thomas departed, he would soon summon a variety of government personnel—West Wing brass, national security aides, lawyers, and other underlings, depending on proximity or the occasion—to inform them he’d just spoken to “Ginni.”

Trump would then identify an official—or, sometimes, he would rattle off a string of names—who he said needed to be sacked “immediately,” according to people familiar with the matter.

When they could get away with it, several of these Trump administration hands would slow-walk these Thomas-inspired firing directives, and wait until Trump invariably forgot about it, cooled off, and moved on to other fixations and influenzas. Others would scramble to try to calm Trump down themselves, advising their boss to reconsider, telling him that a firing or a larger purge in the middle of the Trump term would make him look bad or attract negative media attention.

Thomas’ interactions with the Trump have taken on a new significance Staff administration since the January 6th House Select Committee released text messages showing her urging Trump Chief of Mark Meadows to help overturn the 2020 election. Members of the committee are now seeking to interview Thomas, whose efforts to overturn the 2020 election attendance included at a “Stop the Steal” rally on the National Mall the day of the insurrection.

“Trump loved talking to Ginni so much because he loved hearing about who was a Never Trumper, or allegedly one. He loved people who would flatter him, [as Ginni would do],” said Stephanie Grisham, once a top White House aide to Trump who has since had a very public falling-out with the ex-president. “But also, his obsession with loyalty aside, he just loved to gossip—all the time. That’s something else he got out of his series of meetings at the White House with Ginni Thomas.”

In the text messages released by the committee last month, Thomas defended Sidney Powell, the “Kraken” lawyer whose election conspiracy theories were so outlandish they earned her a billion-dollar defamation lawsuit, the scorn of rank and file Republican officials, and sanctions from to Michigan court. At the time, a number of Trump aids were trying to distance the president from Powell because of her increasingly outlandish comments about bogus election fraud. Thomas, however, urged Meadows not to yield to mainstream Republicans, according to The New York Times.

In her texts with Trump’s consigliere, Thomas also showed a fondness for Steve Pieczenik, a far-right pundit and onetime Tom Clancy co-author whose conspiracy theories and bogus claims were so far-fetched even InfoWars briefly booted him from appearing on the network. Before he began pushing the fake stories about watermarked fraud-catching balls that earned Thomas’ endorsement, Pieczenik had pushed QAnon conspiracy theories, claimed to have arrested Pope Francis, and spun bogus stories about mass shootings being prominent false flags.

During the Obama administration, Thomas and Gaffney participated in a conservative messaging effort known as “Groundswell.” The group, an informal network of conservative journalists, pundits, and political operatives, routinely met at the offices of the right-wing activist group Judicial Watch to coordinate talking points opposing the Obama administration’s agenda and plot the ouster of allegedly moderate Republicans like Karl Rove from the broader conservative movement.

The revelation of Thomas’ texts with Meadows prompted the January 6th Committee to seek an interview with her, according to CNN, but that effort falls short of the more legally compelling option of a subpoena.

In the meantime, Congressional Democrats are divided over how to handle Thomas’ cameo in the Jan. 6 scandal. Some, like Oregon Sen. Ron Wyden, have called for Thomas to refuse himself from Jan. 6-related cases while others like Rep. Alexandria Ocasio-Cortez has called for him to step down or be impeached.

But the lack of a Democratic supermajority in the Senate means neither of the Thomases are likely to have to give up their jobs just yet.

Read more at The Daily Beast.

Get the Daily Beast’s biggest scoops and scandals delivered right to your inbox. Sign up now.