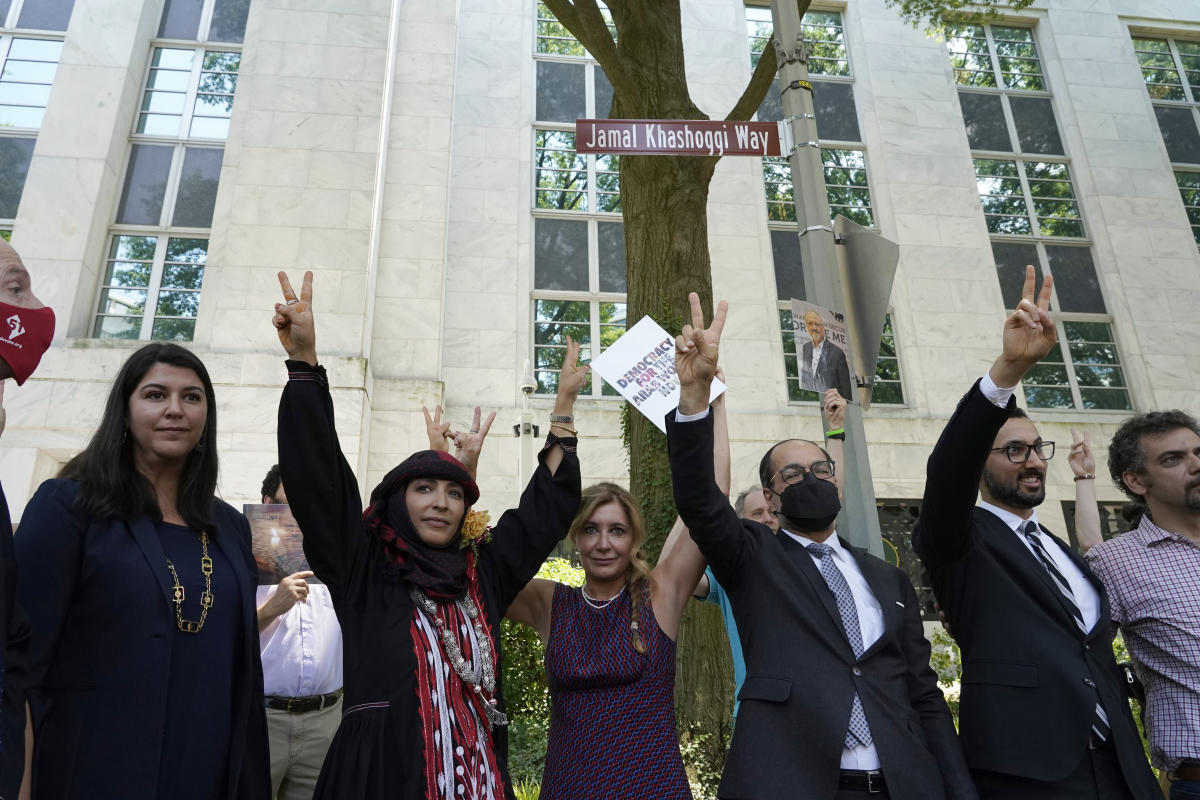 WASHINGTON (AP) — One month ahead of President Joe Biden’s trip to Saudi Arabia, the District of Columbia is renaming the street in front of the Saudi embassy Jamal Khashoggi Way, trolling Riyadh for its role in the killing of the dissident Saudi activist and journalist in 2018.

With members of the DC Council in attendance, the Jamal Khashoggi Way sign was unveiled directly in front of the embassy’s main entrance.

“We intend to remind the people who are hiding behind these doors… that we hold them responsible and we will hold them accountable for the murder of our friend,” said Sarah Leah Whitson, executive director of DAWN, the pro-Arab world democracy organization founded by Khashoggi prior to his death.

Whitson also criticized what she called the “shameless capitulation” of the Biden administration for seeking improved relations with the Saudi government and scheduling an official presidential visit to the kingdom.

Khashoggi, a prominent Saudi journalist and Washington Post columnist, entered the Saudi consulate in Istanbul on October 2, 2018, seeking the necessary documentation for a planned marriage with his fiancee waiting outside for him. The 59-year old never emerged.

The Saudi government initially denied any wrongdoing. But under mounting international pressure, Riyadh eventually admitted that Khashoggi had been killed inside the consulate in what the Saudis characterized as a repatriation effort gone wrong. The CIA later released a report concluding that Khashoggi was killed and dismembered on the orders of Saudi Crown Prince Mohammed Bin Salman.

The Saudi regime has consistently denied that connection. Several lower-level Saudi officials and agents received jail sentences over the killing.

“I’m very proud that we did this, said ”DC Council Chair Phil Mendelson. “The Saudi government cannot forget what happened, what it did. This is a constant reminder.”

The renaming is ceremonial, as signified by the brown street sign instead of the usual green, and it won’t impact the embassy’s mailing address. But the sign will remain indefinitely. An email to the Saudi Embassy seeking comment did not receive a response.

Khashoggi’s Turkish fiancee, Hatice Cengiz, could not attend the ceremony, but a statement from her was read aloud.

Cengiz also directly requested from Biden, when he meets with the crown prince, “Can you at least ask, ‘Where is Jamal’s body?’”

Karine Jean Pierre, the White House press secretary, would not say whether Biden would raise the issue of Khashoggi’s murder when he meets with Bin Salman next month.

“The president is a straight shooter. This is not something that he’s afraid to talk about,” she said. But she didn’t confirm if the killing would be a topic of conversation.

The DC government has a history of such public moves to troll or shame foreign governments. In February 2018, the street in front of the Russian embassy was named Boris Nemtsov Plaza, after a Russian activist shot dead while walking on a bridge near the Kremlin in 2015.

At the previous site of the Russian embassy, ​​a street was renamed by longtime Russian dissident Andrei Sakharov.

Wednesday’s street renaming was essentially a formalization of an independent activist-driven campaign that had been going on for years. Shortly after Khashoggi’s death, local activist Claude Taylor started placing realistic-looking Jamal Khashoggi street signs around the city, including outside the embassy. Taylor said he had as many as 10 signs in different places at one point, including one near Dupont Circle that lasted for two years before being vandalized.

“It’s just a form of public protest with a performance art aspect to it,” Taylor said.

Although he noted with a laugh that he wasn’t invited to Wednesday’s ceremony, Taylor said, “I’m glad the city did the right thing and I’m glad he’s being recognized this way.”